Types of Animations we are looking at:

Also referred to as classical animation, cell animation, or hand-drawn animation, is the oldest and historically the most popular form of animation. In a traditionally-animated cartoon, each frame is drawn by hand. The term "traditional animation" is often used in contrast with the now more commonly used computer animation.
an example here:

An animation technique to make a physically manipulated object appear to move on its own. The object is moved in small increments between individually photographed frames, creating the illusion of movement when the series of frames is played as a continuous sequence.
an example here:
Claymation

Clay animation is not really a new technique as many people might think.  Clay animation began shortly after plasticine (a clay-like substance) was invented in 1897, and one of the first films to use it was made in 1902.  This type of animation was not very popular until Gumby was invented.  The invention of Gumby was a big step in the history of clay animation.  Now, clay animation has become more popular and easier to do.  Later on, more clay animation films were made, such as the Wallace and Gromit series of movies.
an example here:

There are a number of inexpensive ways to create stop motion videos - I am going to add some tutorials and links here:

Download File
The stop motion project can use any number of the techniques above - or a combination of them.  Cut paper, modeling clay, drawing and painting, or using objects -- any technique or combination of techniques is open to your choice.
You will be making a 30 second animation.  After you have developed your idea, you will draw out the story using a storyboard.  Here is a downloadable storyboard page to print off.  And save your storyboard - you'll need it for your portfolio at the end of the semester! All projects must be original to this class and support novice k-12 students. Please make sure to not use any animations from a previous class.

Here are step-by-step instructions to turn your stop motion photos into a movie using iMovie: 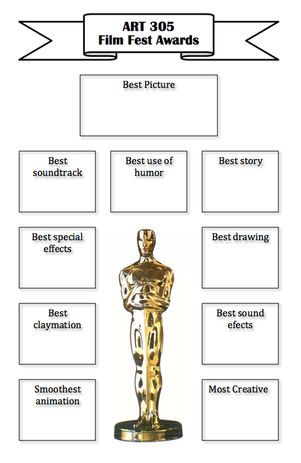 At the end of our unit, we had a film festival and voted on a few "best" categories.  Below is the form we used so you can adapt it to your class needs.